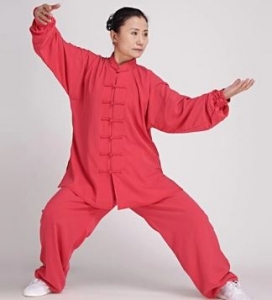 My husband told me once about a woman he saw at the end of our street. He mentioned it casually a few days after, he said when he was walking the dog, he noticed her, in full Japanese garb, doing some kind of tai chi, with a pink boom box on the grass playing Asian music. I would have checked his medication, if he had any. In our suburb, all we ever see is Dad mowing the lawn in his cargo shorts with a stubby, blonde kids scooting around on bikes, a few border collies running on long leads and a group of oldies on their early morning walk.  It’s all pretty dull and mainstream in our street. I didn’t really think any more of it, as I know he is not really a morning person, and it just didn’t seem plausible.

Until I saw her this morning. I got a bit of a jolt as I rounded the bend towards the creek and there she was like she’d popped out of Monkey Magic. Except for the absence of a pink cloud and a BOING sound effect.  She was, just like he said, in full Japanese garb, hunched down like she was about to kick apart a room full of criminals Kill Bill style.

She had on a light pink Kung Fu two piece with darker pink trimming at the cuffs. The boom box was on the ground playing jangling flutish kind of music. I smiled in amazement. I was in complete shock. My first thought was “Shit, he was right!” She looked right through me, holding perfectly still and gazing off into a thousand yard stare. I continued walking and behind me heard a Whoosh-snap! sound as she spun around and changed position. I was shaking my head and thinking “Did that just happen?” in my suburban street at 6:12 am. Am I dreaming? What the low flying duck?

Everything returned to normal very quickly as a woman ran by in a Bridge to Brisbane T shirt singing me a cheery good morning. That brought me right back into the 21st Century. My dog was sniffing and nudging around in the long grass and came out with a half passion-fruit shell. He held this clamped in his jaws like a prize and it quietened his panting down for a bit.

It was a hot morning already, the lorikeets were squabbling over the syrupy Eucalypt blossoms knocking the discarded casings to the ground and shrieking to each other. I passed the park where someone had left an abandoned yellow Tonka truck sideways in the sand, with some little blue thongs and I started thinking about the lady. What was that? How did she get into that state, glassy eyes, and not really focused on anything? I realised I had been in a similar state thousands of times, a bunch of us spilling out of the doors at closing time, falling in and out of cabs,  giggling ourselves silly in a coffee house in Amsterdam.  She wasn’t drunk or high, yet she wasn’t in the now. I realised she was in the in-between.

She was in the place you go at the end of a long run and when you finish your eyes are misty and stinging with sweat and your face is hot and your blood and heart are pumping so loudly you hear it like a whooshing in your head. You feel kind of elevated, not attached to the earth anymore, like you are hovering in a misty, pink mirage above it.

She was in the place I used to get when I swam lap after lap, falling into the rhythm of the stroke. Breathe to the side, head down, breathe out, head up and the body just follows the movement and my mind disappears. Afterwards the air in my lungs felt cleaner, I felt pure and more alive somehow.  I used to swim with my friend. He’s dead now and I miss him. He was generous with his time, money, advice, but the best thing he ever gave to me was a word. This became my favourite word and I love it still. The Afrikaans word dwaal, which means a dreamy, dazed or absent minded state.  I think this is the in-between as well.

I think back about the woman; and I see she was deep in that place, the place I sometimes go if I’m really tired and I meditate and the voice guiding me disappears and I fall so deep, it feels like I fall through my mattress or the place where my body is resting and beyond the floor. While her feet were firmly planted, she was in the in-between, lost in the place behind the music, in the sequence of the movement and she had almost become transcendental. I know that place and I don’t go there enough. The place I can switch off all the instructions to my body, the lists for the future and the memories from the past; a place of ease, rest and spacious mind. The place of the thousand yard stare.

I also get to the in-between in nature, gazing up at the arch and splayed branches of a Moreton Bay Fig, or watching the clouds scuttling across the bay as a storm approaches. Sometimes momentarily when I see a yacht in the distance over sparkling water, my brain gets falls into sensory overload and retreats.

I feel this when my daughters come to me in the mornings, sleep-rumpled and smiling for a hug. I wrap them in my arms all bra-less and coffee breath and I go somewhere else for a second which is pure, deep and cocooning. I don’t have to plan a run, or schedule a swim to get to the in-between, because it’s here in the simple connection of unconditional love. It elevates me. I grab it quickly because soon they will be hungry, snarling, tangle-haired monsters charging up iPads, checking overnight texts and snap chats, demanding breakfast, even though I tell them they are 10 and 12 years old and I am not their slave. I soak up the feeling of the in-between because I know how quickly the tide can turn and it’s hot and they are hungry and we never have enough time in the mornings.

I hope in the midst of this month, which becomes noisy and cluttered with school starting and work ramping up again after the Christmas break, you find some space for your mind to suspend and re-calibrate from the Christmas holiday chaos. However you get there, whether it is with exercise, cuddling, meditating, or in full Japanese garb down the end of the street, I hope you find a pause, a dwaal and the peaceful state of the in-between.

Rachel Wilkinson is a counsellor, massage and reiki therapist, a writer and an over-thinker. She practices from Wello Well in Wellington Point and Step into Health at Mansfield. If you need help with anxiety, depression, addiction, grief, relationship counselling, family or workplace stress you can find her website to read more and send her a message. If she is not trying to manage her crazy Cavoodle, children, appointments or the double shot settings on her coffee machine, she’ll call you right back.

The 5am Golfer and the Cob of Corn January, sick and tired you’ve been hanging on me…
Scroll to top