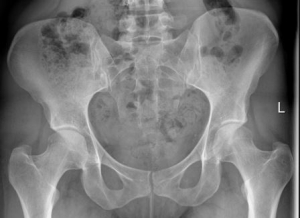 These are not my hips. Mine would show a smaller than average bladder.

At 48, I consider myself too young for orthotics. For those younger than this – these are things elderly people put in their shoes to help them with their elderly feet. Or so I thought. Apparently people younger than 80, need help with their feet as well. Or hips and consequently feet.

Bloody hell. I used to smile smugly when my older husband and friends spoke about their backs, knees, elbows, shoulders, hips and wrists. I was fine, bouncing out of bed every morning, meditating, going to yoga, eating mostly well, a regular at the gym, no longer drinking. All bouncy, until I wasn’t.

It crept in slowly at yoga when I noticed I couldn’t sit cross legged anymore. I had always been slightly lop-sided and one knee sat taller than everyone else. I figured it was just tight hamstrings and became much worse after I flogged my body in the Sydney City to Surf.

This race, which, I will point out, was only 14ks. I need to qualify this because I know half and full marathon runners, I know trail runners, Oxfam 100k runners, iron men and triathletes. I am only a plodder and still haven’t managed a park run at 5ks. It was only my stubbornness to not be overtaken by anyone in a gorilla suit, which got me over the line. It was mental health, not physical health. Those 14 kilometres felt like a marathon to me.

After this race, I struggled to get on the plane to fly home, I needed to hold on to the rail of the stairs, the wall of the toilets and made old lady grunting noises whenever I raised myself from a seated position and  got back down. The following weeks after this, driving around Brisbane, I found myself putting on the hand break at traffic lights, as my legs started feeling weak and shaky holding down the foot pedal.

I began to notice the neuralgia at the end of the day, when I went to bed. I knew my body needed time to recover and rested my legs on pillows and took it easy. I mentioned it to my husband, as a month after the race I still felt achy and had tingling sensations radiating down my leg and my feet were feeling numb. He suggested I see a Doctor. So I googled the symptoms and decided I had MS. I booked an appointment.

The day before the Dr appointment, I had a booking with my daughter’s Chiro. We booked months ago for my tight hips. I had been taking my daughter to see this pediatric chiropractor for her neck this year. Weirdly, watching my child being adjusted in front of me, while I was sitting with pain for months didn’t actually register with me as an issue. Fairly typical parenting behaviour, putting yourself last. She asked me did I have any leg pain with the tight hip. I said I had a weird leg and feet pain, but I had booked an appointment the next day for suspected MS. She did a quick double take. I wished I could move my head that fast.

“Do you have any trouble with balance?” She asked. I stood in front of her in tree pose, one leg wrapped around the other standing on one foot and wrapped my raised arms in the same way.
“Right. What’s your vision like?” I told her I only wear glasses for reading and really only fine print. She told me to cancel my Dr’s appointment and I didn’t have MS. She fiddled with my right leg, it didn’t go where it was supposed to, she asked me to get an X-ray for osteoarthritis.

Jesus. I was furious with my body. Twenty years of weekly yoga for strength and flexibility and now this! Then when I began to think about it, it all started to makes sense. This is why I am crap at skiing, had difficulty with childbirth and had the emergency Caesar. This is why I hate exercising, can’t run very far and always take longer to recover than anyone else. I have arthritis.

I went for an X-ray. I put on the robe, open at the back. I stood with my butt against the cold wall while she kindly took the photos. Then I lay down in what she called froggy pose while she took more photos. My hip did not like froggy pose, especially when she told me not to breathe and then hold it while she checked the film. Hold what? The breath? The position? Stuff you over thinking. I thought. Then thought, I could die here. I breathed. I let my leg drop back onto my other leg, I couldn’t hold it at the right angle for more than a few seconds. I was already feeling very old and very arthritic.

I received a text from the Chiro the following night. You do not have osteoarthritis. Come in and I will speak with you about it. Looks like leg length. Now, I know there is no such thing as one leg longer than the other. My massage lecturer told me that and he was an Osteopath. So I waltz in and get ready to tell her that I just need to get someone to release my psoas muscle and we are all good. I guess that’s why she is the Dr. She explained the bio-mechanics of the body and hips and showed me the X-ray. It was leg length. Not arthritis.  It had nothing to do with my psoas. It had nothing to do with why I am a crap skier or had a ceasarean.

There was a six millimetre discrepancy which meant I needed heel lifts. When she offered me a three pack my raised eyebrows told her I like my shoes. I like my boots, my sling backs, my slides, my heels and my wedges. I like my shoes so much they are edging my husband’s out of the walk in robe and into the bedroom. Thankfully, she sells them in packs of ten. I refuse to call them orthotics. They are a heel lift and I only need one for my right foot. I need to go back and get another ten because it’s coming into summer and I already put five in my boots.

I’m now grateful. Grateful I don’t have MS because I know how much it sucks. Grateful I don’t have osteoarthritis because that would be painful, limiting and stop me from doing all the things I love. Like short gym sessions, lazy dog walks, gentle swimming and restorative yoga. Now the headaches have backed off and my body has re-calibrated and made its way through sore neck, upper and lower back, hamstrings, calves, ankles and feet, I’m kind of even learning to be okay with the heel lifts. But – just for the record – aging shits me.