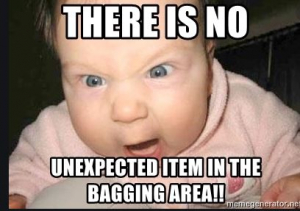 Let me begin by stating I have never lost my temper in a shop before, nor have I shoplifted. But last week some shit went down at the self-serve counter, and I’d like to officially apologise to David for raining it down on him.

I fit my counselling work around my study and teenagers, many of my clients work Monday to Friday and need after hour appointments, which means I work on Saturdays. This day I was busy with individual sessions and a couple. After sitting in the thick emotions of five people I came home looking forward to a cup of tea and a late lunch.

I had barely cut off the engine when my youngest daughter came into the garage shouting over the car, “I’m sorry, I don’t know if it was special or not, it was an accident.” Shit. They know I am sentimental about things; what has she smashed?

I discovered she had knocked and smashed an empty coffee jar while trying to get to the iron at the back of the laundry cupboard. She tried to clean this up and stood on glass. I surveyed the scene and triaged the foot as a priority. We went to the bathroom for tweezers and I tried to locate the glass with my old lady eyes. We could feel it, but it was so painful, she didn’t want me to touch it, so I sat on the edge of the bath lending my support and encouragement. She was sobbing while she tried to find the shard with flat-edged useless eyebrow tweezers.

After she managed to get it out, she applied a band-aid and hobbled into the kitchen. It was then I noticed the cooked two-minute noodles in the sink, around the tap and on the kitchen bench. What the heck? “Can you please clean these up?” I asked. I could feel a headache coming on, as I hadn’t had enough water or food. “I don’t want to touch them,” she whined. I walked into the laundry, picking up the dustpan and brush. “You were happy to put them in your mouth, so you should be okay to put them in the bin,” I sighed.  “I’ll do the glass unless you want to?” Parenting 101, offer them a choice of a very bad thing over a somewhat bad thing. I dusted up the glass and threw this on top of the noodles. Done. Crisis over.

I grabbed the vacuum to do a final once over and noticed some rice on the laundry floor. What the heck? Then I noticed it was moving, well, wriggling. Not rice. I opened the laundry cupboard to discover more on the floor, near all the juice containers I hadn’t managed to get to the recyclers. Maggots. Then I saw them all, wriggling into the kitchen, around the skirting boards, in the cavity of the sliding door. Everywhere. I didn’t want to vacuum them and have them in the bag-less vac, so I began to spray like a maniac and stomp on them. I don’t have time for this shit, I’m too tired and hungry to manage bleeding feet, sink noodles, smashed glass, and maggots.

I flicked the remaining noodles in the bin, but like my daughter, also retching at the texture after the maggots. I finally made a cup of tea and sat down. My phone pinged. A friend inviting me for a last-minute BBQ. A wonderful excuse to leave the maggoty, fly spray house. I texted back “I’m just dropping a child off for a sleepover – will pop to the IGA and be there soon.”

I dropped my daughter to her friend’s place, after her mother asked how I was I rolled my eyes and said something harried, like “I’m good, now,” I rushed back to the car, headed to the local grocery store, and realised I had left all my plastic bags at home. I consoled myself with the fact I only needed to grab some chicken and something to drink. I would be fine without a bag.

The centre was busy as I wandered around, singing to myself, quietly starting to pile my arms up with additional necessities, like fetta cheese, milk, two bottles of drink, a lemon, then a tray of chicken kebabs. It’s the lights and the music, I lose my mind when I enter a supermarket. It becomes too bright and overwhelming with competing brands and the yellow tickets saying buy me I’m on sale! I was already holding much more than I needed as I spotted the crowd at the checkouts and opted for the self-serve.

There were four self-serve checkouts. One closed. Historically, I’ve not had much luck with these machines. I prefer people. But the lines were snaking back into the aisles and there were only two servers. The one guy was holding up and inspecting something like he had never seen it before while people in the line with trollies were looking impatient. I stand at the self-checkout. No bag. I needed to free up a hand to pick up the 15c bag, so I put my wallet down. Straight away I heard it. “Unexpected item in the bagging area.” Fuck. The light started flashing followed by another announcement, “An attendant will be with you shortly.” I looked around. I saw the frowning faces of the people in the queue. I saw two staff serving. I saw a woman in the deli with her back turned slowly and methodically running a hunk of ham back and forth through the slicer.

I decided I could be calm under pressure. I hadn’t scanned anything yet. Even though the machine was telling me “An attendant will be with you shortly,” I muttered under my breath, quite a few expletives about how they won’t be coming anytime soon. I grabbed the bag and my stuff and moved to the next self-serve counter. Genius. I started scanning, unconcerned with the flashing light and announcement. A man and child approached with one item. He glanced at the closed counter, the flashing one, then me. I turned to him saying “Good luck,” noticing he only had one item. I went back to my scanning and heard from behind me the bored deadpan and somehow British accent say the familiar sentence. “Unexpected item in the bagging area,” and then the reassuring but altogether big fib. “An attendant will be with you shortly.” I turned to him saying “You know, they’re not coming, don’t you?” He shook his head and his son looked up at me like he wanted to cry.

That was the moment for me. I dug my phone out of my handbag, flicked on my mobile data and googled the IGA and suburb, which I can’t disclose as I may get a lifetime ban. I heard the phone ringing in the distance, no one was picking up, it rang for a long time. The man behind me watched me with an open mouth while I prepared for my moment. The phone was picked up. “Hello, IGA, David speaking!” he sounded quite upbeat. “Hello David,” I realised I could deadpan like a serial killer, in a slightly British accent. “I’m at the self-serve check out in your store.” I’m pretty sure he would have been able to hear the “Unexplained item” spiel overlapping three times in the background. “You have one check-out closed and three flashing. You seem to be understaffed. No one is coming.” There was a long silence at the other end of the line. Then I pulled out the sucker punch, the Karen, the angry mum voice “DAVID??” A man came running. He took one look at me and passed his card on in a panic to a younger man who appeared from somewhere out of the frozen section. The young man apologised frantically, David ran off back to his office, past the lady at the deli with her back turned continuing her slow-motion slicing.

I paid and picked up my bag. The man behind me, who had now also been released from unexplained item purgatory, said to me “Good move, thanks for calling.”  His child just looked up at me and stared. I nodded. “No worries,” I said walking back through the sliding door to my car. At that moment I realised I had not paid for the 15c bag and instead of feeling guilty, I felt totally deserving of that bag.

You never really know what kind of a day people are having. Sometimes it’s difficult to understand why people lose their tempers, why toddlers and children have meltdowns in public, why road rage happens, or indeed, retail rage. I feel it’s important to approach with caution and compassion, ask if everything is ok. I know what it’s like to juggle many roles and responsibilities, I know what it’s like to hold everything so tight sometimes you drop stuff. Sometimes it is the unexpected item which tips you over the edge.

All I know is that therapy and talking with someone helps. Losing your sh!t at a man named David and shoplifting a 15c bag is a short-lived and shallow victory. He didn’t know about my day and he didn’t have to understand. A therapist can sit with you in your sadness, in a non-judgmental space to support you, listen to your story and try to understand. A good therapist will sit on the edge of the bath with you, while you take the splinter out, crying, grabbing a torch so you can both see it together. A quality therapist will offer you a range of strategies or suggestions to help you manage stressful emotions, repetitive thinking and behaviour. Regular therapy allows you to process your baggage before it all piles up.

Even though we often think it’s easier to do alone, without burdening anyone, our stress can pile up so high and fall on the wrong person. Like David. He didn’t know about my day at work, the sink noodles, the glass in the foot, the maggots, he just knew about the angry woman at the self-serve checkout.

Keep an eye out for friends and family who may be internalising their stress, grief, anxiety, and depression, by detaching, disengaging, getting angry at the small stuff and who have stopped doing the things that used to bring them joy.

Remember to take your own bags to the supermarket and be kind to retail staff.

Rachel Wilkinson is a holistic therapist working with individuals, couples, and youth. She assesses presenting issues as well as your overall health including support, family, community, work, relationships, social, physical, psychological and emotional wellbeing. Rachel is a massage therapist, reiki master and kids’ yoga teacher. She is the author of recovery e-book  Hell in a handbag.  To make a booking with Rachel follow this link.

Clues and ShoesI’m not angry anymore
Scroll to top